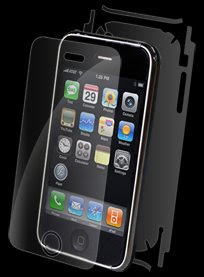 I'm one of those geeks who loves to find something fun cool and show others why they should have the same thing because it will make their lives better.

I bought an iPhone, and I love it. I put off buying one because I knew I'd be hooked on it, and I am. The apps you can use on it are fun, and even the free ones can be innovative. I've only paid for one app so far, and that was a mistake purchase. I bought the game Lemonade Stand, but I'm glad I did because it is a new version of the old game I played on my Apple 2C, and for us old-school geeks it includes a version with the old graphics.

The other reason was that the iPhone is bigger than my last cellphone. Not that an iPhone is big, but my last phone (a Sony Ericcson 580i) was quite small. I always buy a protective case for my cellphones, so I bought a ZCover iSAglove silicone case with an armband clip. I wanted to use the armband clip when I exercied and planned to buy the window clip to make the phone a cheapy wireless system in the car, but I found that the case was quite bulky. Because it's silicone and has ridges all over it, lint sticks to it and it is difficult to pull smoothly out of the case.

Because we were planning on taking the iPhones on vacation to Dominican Republic, I was trying to find another case when my sweetie showed me this video for ZAGG InvisibleSHIELD armour (I've embedded the video below). After I saw the video, I was sold on it. We picked up a pair at Westworld the next day.

The installation looks really difficult, but it's not too bad if you watch a video on installation first. Sweetie installed his armour first, and then I installed mine. They each took nearly half an hour to install, and it was tough to get the sides to stick correctly. Still, we followed the instructions, (especially the "palming" technique) and it did the trick. 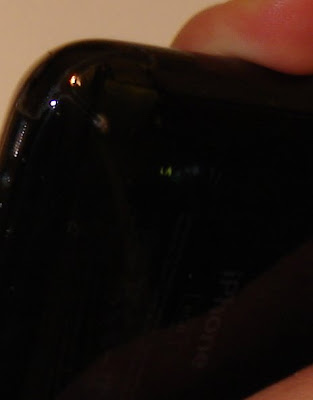 I had a little trouble with one of the corners. There was a bubble that I couldn't quite get out, and it kept it from wrapping around the corner properly. It doesn't stick out or hook on anything, and I'm probably the only one who notices. (See the much-magnified picture?)

The ZAGG InvisibleSHIELD is a cool product. They protect from almost any scratch, and it's only 0.2 mm thick. The armour won't protect from impact damage, so if you drop it, it will probably be just as broken.

The good news is that the case won't be scratched even if it is broken. I tend not to drop my phone too often, but I worry about scratching it since I keep it in a purse.

If scratch protection is most important to you, then this is the case for you!

I am an unabashed Star Wars geek. I teem with useless trivia about the original trilogy, which I've watched over 100 times. R2D2 is my favourite character in the series, followed by Mara Jade. I believe he's the only one who knows what is going on throughout the series, and would have told people if C3PO could translate properly!

I saw this, and the geek in me got so excited that I actually drooled. When it was over, I looked at the hub and said, "I am so turned on right now." He looked at me and said, "What a geek!"

I own a lot of glasses. 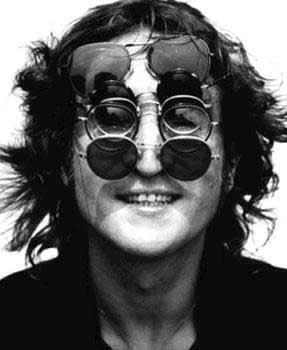 In my former career I was an optician, so I own a lot of different glasses and contact lenses. Basically, it's kind of ridiculous.

I have a hatbox crammed full of glasses, and I'm still working through the lenses I collected over the years. I even have hard contacts that I never wear - you need to build up wearing time, and I rotate contacts and glasses too much to build it up.

Sometimes I walk into the office in the morning wearing glasses I haven't worn in a year. It's fun to have someone ask if I have new glasses. I can change my eye colour or even make them look like wolf eyes.

I always get excited when I see new types of transformation contacts. The lenses at theDollyEye.com fall somewhere in between excitement and creepy for me. The lenses make your eyes look like the big glass eyes in porcelain dolls. 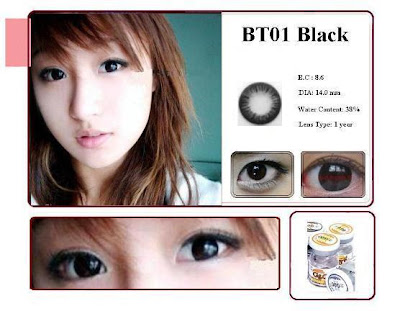 They are cute, but they also border on creepy. They come in several different colours, and they extend past a natural iris to put nearly 15mm of colour across the eye. Because the colour passes beyond the upper and lower eyelids, the effect is that you have huge eyes like a doll.

I don't know if I'd pick these for myself. Because I have blue eyes, I find that colour change lenses (rather than colour tinting lenses) tend to look unnatural on my eyes. The colours get very pale, so blue lenses look ice-blue like a husky dog, green lenses look like spring leaves, and brown lenses look yellow. There are times when this works to good effect. I'd like it if I was dressing up in costume like a zombie or an elf, but for daily wear this isn't the look I'm going trying to achieve.

Still, the black ones might be good to try. They'd look like intense, dark grey eyes. What colour would look good on you?
at 21:25 0 comments

Did you have a treehouse as a kid? Bet it wasn't as awesome as these...

Great, I think I'm about to go on a purse binge. Fabulously Broke In the City just pointed out to me that Shopper's Drug Mart is carrying the cutest purses by a Canadian company, Suede & Co.

There are a few that need to come home with me: 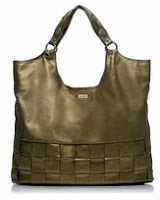 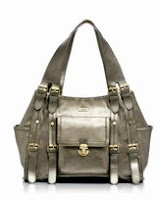 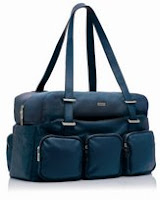 As if those weren't pretty enough: 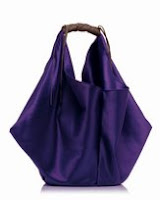 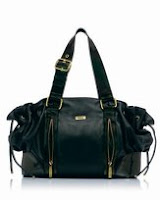 I think I'll be making a trip to Shopper's this week. I have enough Optimum Points on my card to get a couple of them!
at 22:19 0 comments 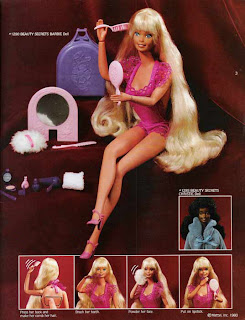 I was a tomboy as child. I loved Tonka trucks and camping equipment. But since I'm such a conundrum, I also loved dolls. I played with Barbie until I was much older than was fashionable, under the pretense that I was playing with my sister.

When I grew older, I realized that Barbie didn't look like me. I was a thin girl with a small bust and hips, and Barbie was, well, pneumatic. She was not like me, so I put away childish things, but I couldn't get rid of them completely. I still had a secret love of Barbie.

When I studied Clothing & Textiles in university, we had a lecture in one class by a Barbie doll collector. She explained to us how Barbie had influenced and been influenced by fashion and popular culture. I was amazed because my little Barbie connection from childhood suddenly had a connection to feminism and pop culture in ways I'd never considered. Despite her unnatural dimensions, Barbie had many positive career roles, including:
Barbie was a beauty and she and her friends represented many cultures, always with a great sense of style and a killer makeup look.

Others know the fun of Barbie too. MAC released the MAC Loves Barbie cosmetics line in 2007 with beautiful doll-like shades like bright pink. This was one of MACs most successful collections, and Barbie was brought back to the minds of women who grew up playing with their dolls. In turn, Barbie released a MAC Barbie Doll, which was sought after by not just Barbie collectors but MAC collectors as well.

I have to admit I still long for some of the Barbies that come out every year. Face it, Barbie is still hot. Hot pink!
at 22:43 0 comments