I've been trying to get into running for a while now. I've bought the fancy shoes. I've gotten the snug, shorter pants. I've set my alarm clock an hour earlier than normal. The only thing I'm missing is the "push."

You know the push. It's the final thing that persuades you, "Yes, I know the bed is toasty warm, or that movie and cup of hot chocolate is ready, but instead I'll go out and run until I'm sweaty and sore."

Pain is something I handle pretty well. I believe I have a reasonably high threshold for pain. Still, I don't go out of my way to cause myself pain, so exercise has never appealed to me.

I'm not sure exactly how to get that final drive to get running. The motivation to look better is not enough to make my body ache. I'm vain, but I'm not quite that vain. The goal to feel better is a strong drive, but isn't quite enough for me.

I saw this and thought that it might be enough of a push. Enjoy!

When it was announced that Southgate was getting an expansion and a facelift, I was stoked. It could do with a facelift, and LRT extension will help revitalize the area and make it more accessible. But since I now work in Sherwood Park and live in Mill Woods, I only get out to the mall every month or so to play at MAC. I didn't really pay much attention to what new outlets were moving into Southgate.

I've noticed the marketing campaign around the city along with everyone else. I was excited to find out what it was, and when I found out it was the Southgate reopening I was more excited than some people.

I have preferred Southgate ever since I came to Edmonton for university. Even after I chose to stay here, it became my favourite mall. My first three years out of university I worked at West Edmonton Mall, and I enjoyed the atmosphere at the world's largest indoor mall. I think it was how I imagined New York City is: loud, active and busy at all hours of the day.

But I always liked Southgate more. Even though WEM managed to house so many high-end retail stores, I preferred the cool, relaxed atmosphere at Southgate. The mall is so bright and sunny, as though the skylights let in extra light. Southgate also scored the first MAC outlet in Edmonton, and that pretty much solidified its place in my heart.

Earlier this week I booked an appointment at Blu's in Southgate to get some trousers hemmed. I new the mall reopening was today, so I planned to look around and see what was new. I wandered through the newly constructed wing and saw familiar black and white stripes... 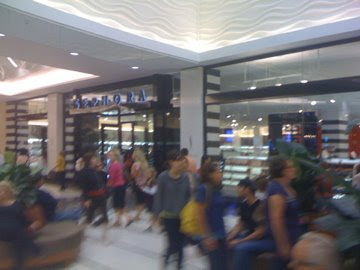 Well, bust my buttons - there's a Sephora! No more travelling to the west end of the city for my glam purchases! MAC and Sephora, finally closer to home. What a cost savings in fuel and time! :) Naturally, I had to grab a few items...

By coincidence, I just ran out of moisturizer. I've been using Sweetie's Infinite Aloe, but I've been dying to try Philosophy's Hope In a Jar - 2 oz (CDN$49) after a cousin told me how much she loves it. Gee, what an opportunity!

I finally picked up the Shu Uemura Lash Curler (CDN$19) to see if it's really better than my trusty Life Brand set from Shoppers Drug Mart.

I picked up the Tweezerman Folding Clipper (CDN$10) for Sweetie, who took one look at it and said, "I don't think I'll never use it." Fine by me, that makes me less over budget!

Time for some Too Faced Shadow Insurance (CDN$17) to battle my oily eyelids. I've read so many rave reviews about this eye primer that I just couldn't resist.

I've been wanting a thin eyeliner brush and a pencil brush, so I had to try the Sephora Double-Ended Winged Brush (CDN$18) and hopefully get a two-for one. The bristles are very soft, so we'll see how it applies and holds up.

The best part was that I had enough Sephora points to get a free sample of Benefit BAD Gal Blue mascara, another item on my WANT list.