Hypothyroidism - Gears Grinding to a Halt

Wow. I have a medical reason for being a fat, lazy slob. Cool!
I just had an appointment with my doctor to follow up on some blood work. It was part of my annual physical, but I put it off for months because I have a thing about needles. He wanted to test my thyroid hormone levels because I had put on weight over a year that hadn't come off and my Seasonal Affective Disorder (SAD) symptoms have been stronger this year. I just have no energy and I'm more sluggish than usual. He wanted to check if I have diabetes or an iron deficiency. 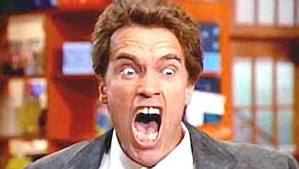 I was nervous for the last week after booking my appointment, mainly because my doctor's schedule was so open and I'm used to booking appointments farther out. Usually, I need to book at least a week in advance, but the receptionist sounded like I could come in the following day. That didn't work with my schedule, but I kept thinking, 'What's wrong that he can see me right away? He never sees me right away!' I joked about it with Sweetie last night, telling myself "It's not a tumor." Okay, so I can be fatalistic.
When I went in, My test results showed that my cholesterol is a little bit high, but marginally, so adjusting my diet will fix it. My blood, blood sugar and iron levels are all good. Then he dropped the sluggish bomb.

He confirmed that I have hypothyroidism. My thyroid is producing about half the thyroid hormones I need to run my metabolism properly.

Now for the crazy part. I'm looking up hypothyroidism online, and I discover the following symptoms. Look at how many I have (in green):


This blew my mind. Most of the oddball things that are wrong with my health are symptoms of low thyroid function! This sounds like a laundry list of woes, but if you think about how much your endocrine system controls your body, it makes sense that systems all over would be affected. The human body is wild.

This is good news because it's a relatively easy fix. From the western medicine side, I can just take a synthetic thyroid supplement, just like taking extra vitamins. He wrote me a prescription for SynThroid and told me that it will take about two weeks to feel the effect, so by Christmas I should be a ball of energy. He also told me to book a six-month follow up. More needles. Great.

I'm not taking this lying down though. A bit of research revealed that from the holistic side, I can take iodine, selenium, and add coconut oil to my diet.

It turns out that too much polyunsaturated fat can inhibit tissue response to thyroid hormones. Coconut oil is a saturated fat, and it promotes increased metabolism. Coconut oil will not cure a sluggish thyroid, but it's like adding high octane fuel to your engine - it improves performance (metabolism). Crazy, huh? That might explain why I ate like a pig in the Dominican Republic and didn't gain a single pound. Lots of pina coladas.
at 10:53 0 comments

Have you ever heard the adage that says everyone is especially good at three things? Sometimes the three things are kind of weird, but there are always three things people excel at.

I love movies. I watch a lot of movies, old and new, and I love to see movies over and over again. One of my three things is trivia, especially TV and movie trivia. I watch TV shows and movie and retain all sorts of oddball information about them. I love pulling quotes and

For a movie geek like me, Angry Alien Productions is wicked fun. 30-Second Bunnies Theatre takes movies and condenses them down to half a minute, as performed by cute bunnies. Even the non-bunnies often have bunny ears mysteriously tied around their heads.

Jennifer Shiman creates the 30-Second Bunnies Flash movies all by herself, with her friends helping out with some of the voices. Started in 2004 as a way to open doors as a satire humour coloumnist, Shiman first bunnified "The Exorcist." After a lot of positive feedback, the bunnies made more films that year, until Good Morning America played their version of "Titanic." After tha, 30-Second Bunny Theatre was invited to create movies for Starz.com, which now hosts the bunnies' newest releases.

My favourites include The Rocky Horror Picture Show, Reservoir Dogs and Star Trek II: The Wrath of Khan. But the best, for me, has to be the one with a 4,000-pound shark with bunny ears tied around his head. That's right... 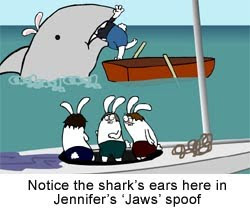 This month, the bunnies are wishing us a Merry Christmas by bunnifying Rudolph the Red Nosed Reindeer. This marks the first time they've tackled an animated film. Somehow there's an irony there...

P.S. Watch for the scroll-over buttons at the beginning and the end of the movies for some extra bunny goodness.
at 13:14 0 comments